The moment Eliot Wadopian first saw a double bass, he was transfixed.

“It’s a wonderful memory,” he recalled. “I was six years old. I was sitting next to my dad at the Thomas Wolfe Auditorium. The orchestra came out on stage — and I saw someone, a bass player, dragging out this big thing that I had never seen before.

He remembers thinking: “What in the world are these guys carrying out here?” 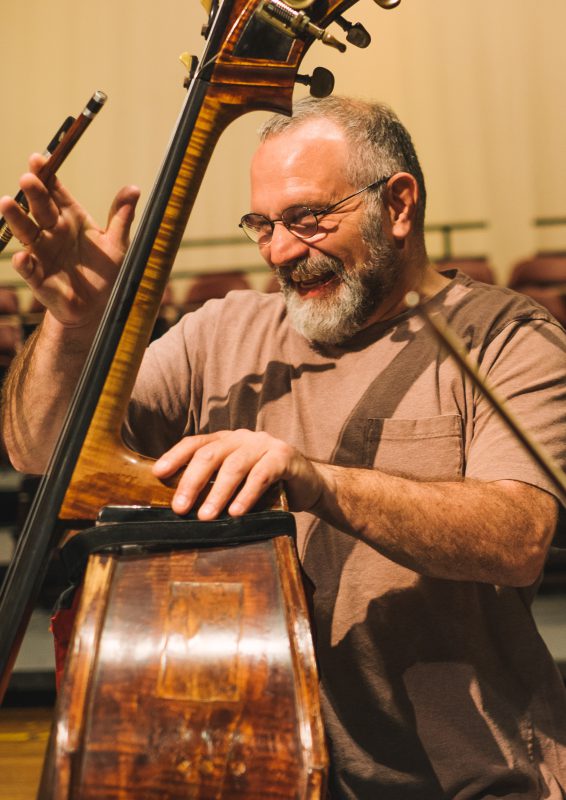 As the symphony began to play, Wadopian’s eyes stayed fixed on these strange, stringed giants. He watched as the musicians hugged tight to their instruments, fingers rolling down the neck, plucking precise notes from memory and sawing strings in unison — a deep richness emanating from the wood. In that moment, Wadopian knew: “That was what I wanted to do.”

For 38 years, Wadopian has performed with the Asheville Symphony. He started on bass guitar at age 13 or 14 — and picked up the string bass, that odd instrument from his childhood memory, shortly after.

“Music, to me, has been like riding a magic carpet,” he said. “It’s taken me all over the world — several times. It’s really been something.”

Through his music, Wadopian has been to Russia. He’s traveled across Asia. He’s been to the Philippines, Greenland, Israel. He once spent 30 days touring China.

Not only did he perform for people of other cultures, but he spent his time abroad listening, soaking up different sounds across the globe.

In the Philippines, Wadopian once heard the din of distinctly American music flowing through the streets. Drawn to the sounds of his own culture, he followed the music — and found a band of Filipino musicians rocking out to a full crowd.

“The Philippines has such a deep music culture of its own,” he explained. “But these guys were so talented you couldn’t even tell it wasn’t American guys in the band.”

No matter the culture, background or physical position across the globe, “music is such a powerful way of bringing folks together,” Wadopian continued. As he traveled from place to place, he began collecting different sounds, adding pieces of other cultures to tracks in his head.

“World music really got to me,” he said. “It’s like soul food for the ears.”

After each tour, Wadopian returned to Asheville, where he watched the city — and the symphony — grow and evolve with every passing year.

“The Asheville Symphony has been a mainstay for me,” he said. “I was right out of college when I first walked out on stage with them. It’s been quite a journey.”

In addition to his work with the Symphony, Wadopian makes up one-third of the band Free Planet Radio, combining the global sounds from his travels on upright bass, drum and host of other instruments — Indian dotar, sarod, Turkish cumbus oud, melodica, piano.

“It’s a little bit like working on two different sides of the musical brain,” he said. In Free Planet Radio, he can flex his creative muscle, hatching intricate ideas to blend mountain melodies with the traditional music of North Africa, India, the Middle East. 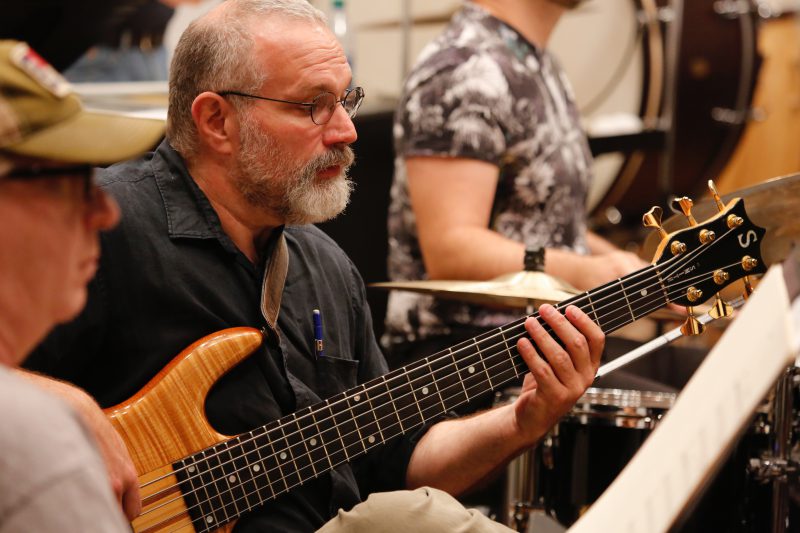 But with the Symphony, he contributes to the Asheville community in a completely different way, working as a team with other musicians — other bassists — to perfect complex and challenging arrangements that have often awed audiences for centuries. On one of the city’s largest stages, Wadopian and five other bassists form a foundation on which other instruments build.

“What jazzes me the most about playing classical music is the realm of emotion that’s covered in some of the music,” he said. “It’s stunning to me. I will admit that I get emotionally involved with music — to the point of even coming to tears. And it happens with Free Planet Radio, too. Music is just beautiful.”

In 2016, Wadopian watched his worlds collide on the Symphony’s collaborative album, Sessions, which featured Asheville musicians across the spectrum of genres, backed by Symphony musicians. Wadopian and Free Planet Radio worked with the orchestra and singer Lizz Wright on the album’s fifth track, “Circle Round the Flame.”

“We had been wanting to do something with the Symphony for such a long time,” he said. “So it was great watching this idea come together.”

Over his decades with the Asheville orchestra, he’s watched the Symphony become more and more involved in the community — and vice versa.

“It’s a challenging time for classical organizations,” he said. “But I’m always thrilled to see these full houses at the Asheville Civic Center. And I’m really looking forward to Darko [new music director Darko Butorac], because I know he’s going to have some great ideas. I can’t wait to see where he takes us.”

But, most of all, Wadopian is just happy to do what he loves best — on the instrument he first heard on the stage where he now performs.

“I live a very blessed and wonderful existence,” he said. “I keep pinching myself, thinking: How lucky am I to get to do this — perform on both sides of the musical coin?”