ASHEVILLE, N.C. —The Asheville Symphony is pleased to present one of France’s leading pianists, Alexandre Tharaud, in a recital of Bach’s mesmerizing Goldberg Variations, on Saturday, February 17. The recital will take place at 8 p.m. at Central United Methodist Church located at 27 Church St. in downtown Asheville.

This iconic work comprises an aria and a set of 30 variations including canons, a fugue, a French overture, a siciliana, accompanied solos, and a series of inventions and dance-like movements. It is a complex and notoriously difficult keyboard masterpiece, and an audience favorite, that is full of joy and beauty. 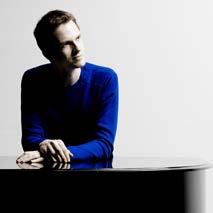 Alexandre Tharaud is intimately familiar with the Goldberg Variations, having taken a nine-month sabbatical to hone his interpretation of the piece. His recording of the tricky work, released in 2015, earned him a spot among The New York Times’ Best Classical Recordings of 2015. New York Times music critic Vivien Schweitzer said of the recording, “Beginning with a spacious Aria, Mr. Tharaud offers imaginatively ornamented renditions of each movement, his playing—full of contrasts—spirited and poetic by turn.” He launched the recording’s release with performances at the Philharmonie in Paris, St. John Smith’s Square in London, the Cologne Philharmonie, and the BOZAR in Brussels.

Recognized on the international stage as an artist of unique vision and originality, Tharaud has earned praise for his performances and his recordings, which range from Bach, Chopin, Rameau, and Ravel, to music inspired by Paris cabaret of the 1920s. His recital performances have been called “an exemplary mixture of bravura virtuosity and cool intelligence” (The Washington Post).