MENUCLOSE
Love is in the Winds: Chip & Karen Hill 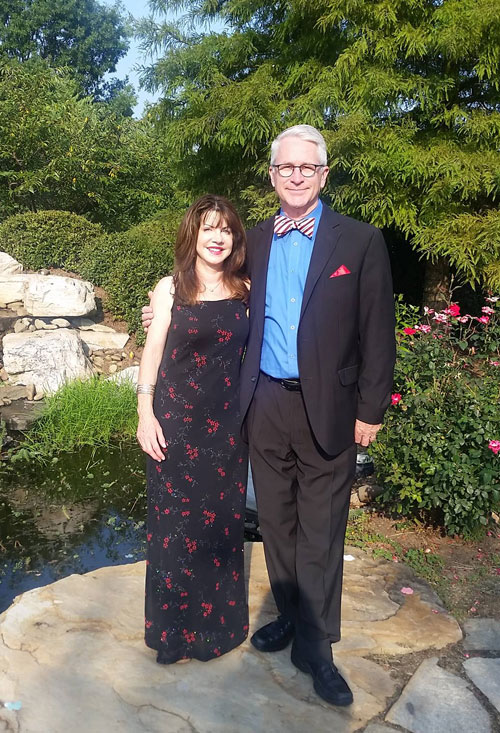 “I’ve played with lots of clarinetists in my life,” Chip Hill began, “but I would rather play with Karen over anyone else.”
Upon arriving in the Southern Appalachians, in 1985, Chip immediately joined the Asheville Symphony, while Karen, shortly after, began performing with the Spartanburg Philharmonic. Eventually, a second clarinet position opened up at both orchestras, and the clarinet couple jumped on the opportunity to play with one another professionally.

At the Asheville Symphony, Karen sits second chair — and at the Spartanburg Philharmonic, the roles are reversed.
“It’s interesting, because playing second clarinet is so much different than playing principal clarinet,” Chip said. “We both get to work on the different skills in each position — and it’s easier because we know each other’s playing so well.”
Chip and Karen Hill first picked up the clarinet around the same age, setting the wheels in motion for both their careers and their future together.

“My older brother wanted to play clarinet, but [the school] was out of clarinets at the time,” Chip explained. “He ended up with a trumpet, and, years later, I ended up with a clarinet.”

In fifth grade, Karen was offered music lessons through her school. “The school sent a list [of instruments] home to our parents, and my mother circled clarinet. I had nothing to do with it,” she said, laughing.

As he got older and his passion for the instrument grew, Chip told himself that he’d never date another clarinetist. Music is too competitive — and their interests would be too similar.

“But then I met Karen — and, of course, I ended up marrying her,” he said with a laugh. “We have a close relationship in and out of music. She knows all the intricacies of my playing, and I know all of hers. When I play with someone else, it feels like I’m working — but, with her, it’s never work.”

Aside from sitting side-by-side while performing with both orchestras, Chip and Karen both work together at the MasterWorks Festival (where Karen is the Director of Wind Chamber Music), and they also each teach the next generation of music masters. Chip is a professor of music at Limestone College in Gaffney, South Carolina, and Karen is a lecturer in clarinet and saxophone at Converse College in Spartanburg.

But, the duo both mentioned, they rarely ever practice together at home — leaving work at work as much as possible.
“It’s interesting,” Karen said, “because we’ve worked together almost all of our professional careers. We haven’t really ever known anything different. It’s not competitive for us. It’s actually just really helpful. We play for each other and give each other comments.

“They’re usually solicited comments,” she added with a laugh, “though occasionally they’re not.”

Chip added that, at this point in their careers, where both are successful musicians, “competitiveness doesn’t really have a place.” Though, even in the beginning, he continued, “there was never a real competitiveness between us.”

Performing with the Asheville Symphony for 34 years, Chip and Karen have together watched the organization grow.
“It’s just been exhilarating to see the transformation over the years,” Chip said. “I’m more excited than I’ve ever been about the future of this orchestra.”